You ever hear the phrase ‘the elephant in the room’?! He’s with me. That giant, pink (I like to imagine him as pink) awkward git is with me. After I was diagnosed with cancer, he was tiny, insignificant in fact. Everyone I talked to or who came to see me, everyone who called or texted, was happy to talk about my elephant. It wasn’t awkward or stressful, it made things feel easy. I didn’t feel separate from the people I was with. After my surgery and before my radio-active iodine treatment, he was still a pretty popular choice of conversation. What the plan with him was, how he was getting on, how I was coping with my new elephant.. people brought him up a lot. That was great, because it meant that I didn’t have to.

I didn’t want to talk about him all the time, but it was nice to get it out, feel free to talk about him, without having to be the one to bring him up. It made it easier to ask for help or support when I needed it. That acknowledgment of the fact that I had this new elephant and that he was impacting my life was good. It made me feel less separate, because in most of the rooms that I was in, I was the only one who brought an elephant with me.

Gradually though, people stopped mentioning him… and the strangest thing happened. He began to grow. The less people acknowledged him, the larger he got. The less people asked about him, the more he inflated! Sometimes, when I walk into a room I feel like I have to stuff him through the door ahead of me, and when people ignore him, then he puffs up even more. It’s very stressful. However when someone asks about him, how he’s doing, how I’m feeling about him, he deflates a little, and I feel immense relief. That little acknowledgment that I have him with me, that I’m wrestling with him day in, day out, gives me more warm and fuzzy feelings than I can explain. The idea of someone taking the time to say ‘I can’t help, but I’m thinking of you’ or ‘I’m glad to see you’ when it has taken every ounce of your strength to get dressed and leave the house, makes everything feel better.

It’s very difficult to explain to people how you feel, when you look ‘fine’. I haven’t had to have chemo, and believe me, I thank my lucky stars every night for that. So on the outside I look ‘well’. Nonetheless I have lost my thyroid, which I need to function normally. Most days doing the most simple of tasks feels like I’m wading through treacle. Being allowed to talk about it, this huge life altering thing, being encouraged to talk about it, makes it bearable. 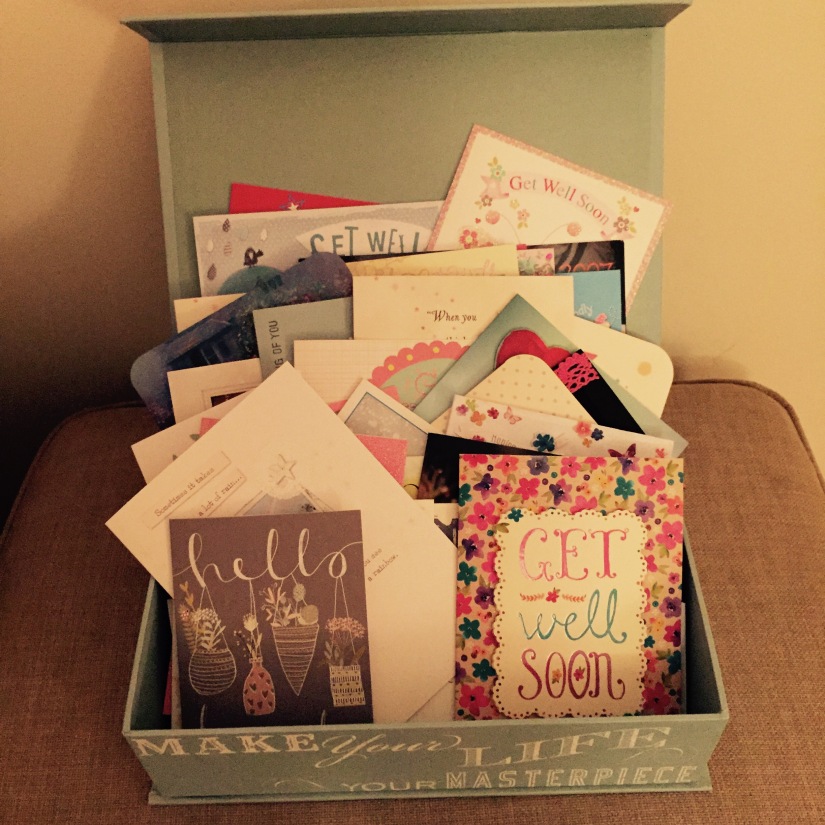 When I’m feeling low, me and the elephant sit down and look through my little ‘box of encouragement’. I received so many beautiful cards and letters, with wonderful words of hope and love and warm wishes in them. I read through them and it genuinely makes me feel so much better. I look around my home which is filled with beautiful tokens from special friends and I feel the love in them, and before I know it, my elephant is little again and I can tuck him away.

19 weeks ago… that’s when I found out that I had cancer. That alone is life changing. Just hearing those words, your changed forever. In those 19 weeks I’ve had surgery, radiation and had to think about and deal with things that have made me different. Cancer can very easily make you feel separate from other people. Isolated. You can be in a room full of people and still feel separate, just you and your elephant. In that 19 weeks I have had aquaintances turn into friends, but also, friends turn into aquaintances. If someone you know has an elephant of their own, talk about it! Acknowledge that it’s there, help them shrink it a bit… because there’s nothing heavier to carry, than an invisible elephant.